Fortunately, for all concerned, the gamble has paid off (as if Marvel ever had any doubts!?). Big time.

Thor: Ragnarok has of course proved to be a massive success. Budgeted at $180 million and currently raking in almost $528 million dollars (and counting), and the film scoring a whopping 8.2 on IMDB. Most impressive. Safe to say, the results and the critical and commercial reviews having been fantastic. But what of the film itself, in my humble opinion?

Well, having watched it over a week ago now, I still catch myself chuckling unexpectedly at some of the one-liners contained therein: it definitely leans more towards the comedy angle, which is totally expected given the Director’s comedy pedigree, but this doesn’t mean that the action is sparse either. There is a very surreal streak of comedy throughout the film, which is difficult to convey accurately in print but, trust me, it is hilarious.

Self-deprecating, witty, quick-fire, irreverent and pithy are just some of the adjectives I could throw at it with Chris Hemsworth’s immaculate comedy timing complimented nicely by Jeff Goldblum’s jittery, hesitant comedy-styling as ‘The Grandmaster’ of landfill-planet Sakaar and his interplay with his ‘Melt-Stick’-happy hench-woman ‘Topaz’ is pure comedy gold too.

Much like both volumes of ‘Guardians Of The Galaxy’, most of the runaway laughs come courtesy of a hulking blue alien, this time named ‘Korg’, a gladiatorial rock-warrior voiced by Waititi himself (absolutely screaming out to be given his own film). He easily steals the show with his stream-of-consciousness speech patterns, high-pitched voice and unexpectedly philosophical nature.

The opening sequence alone sets the tone for the film as one seriously dreadful foe Surtur (mo-capped by Waititi and voiced by the legendary Clancy Brown) fails spectacularly in his attempts to instil fear into the mighty Thor as he is ensnared in a net bag like a giant Satsuma.

The action is slick, exciting and consistently peppered with surreal humour and Cate Blanchett’s Hela adds a superbly dark and gothic (not to mention quite intentionally sexy and fetishistic) element to the story. She absolutely chews up the scenery whilst revealing that the origins of Asgard proves to be not so resplendently wholesome after all.

The improvisational nature of Waititi’s comedy has clearly given the film a fresh and funny approach and an early encounter in New York with another major MCU character is genuinely hilarious. Researching behind the scenes has also revealed that Waititi encouraged much of the film’s humour to be free-styled and then cherry-picked the best gags from the comedically-rich material (keep your eyes peeled for some very amusing and unexpected cameo’s during the Asgard ‘play’ scene).

The literally devastating and controversial ending – of course I’m saying nothing – has set the film up nicely for not only the inevitable Thor 4 (hope they pick an easier title to say) but also next April’s ‘Avengers: Infinity Wars – Part One’. 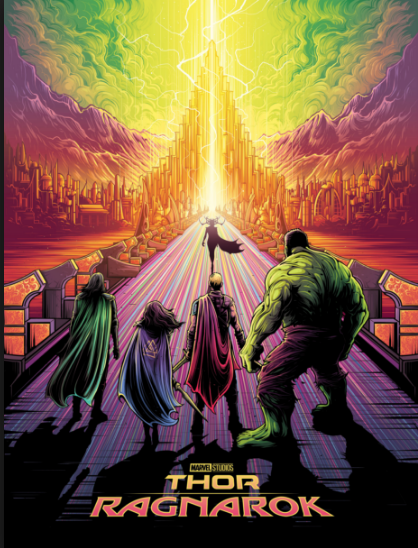 Much has been made of the gladiatorial duel between Thor and Hulk featured prominently in the trailer and the finished results don’t disappoint: the pivotal scene is an instant-classic in the MCU, both funny and thrilling.

The only character I did have problems getting to grips with in the film was Karl Urban’s Skurge The Executioner,. He’s a tattooed, shaven-headed, Cockernee executioner so stereotypically (and inexplicably) Landuner, I found him quite painful to watch at times.

The main reason for this is because I’m really fed up of British characters being represented by either “Doimand Gee-Zaa’s” or Hugh Grant-style-oh-so-affluent-from-Henley-On-The-Wald-dontchoo-know?-types. Mercifully, his character is not in the film enough to spoil it and I was able to pretty much ignore his small-but-embarrassing role.

The character development of The Hulk, Thor, Loki and (hard-drinking) female warrior Valykrie are nicely balanced with action and humour throughout and one major character gets a beautifully understated and poignant send-off.

All-in-all, a terrifically entertaining, constantly hilarious and superbly action-packed Threequel – which I would argue is easily the best Thor film to date (and easily the funniest) – and it takes the “Thorner” in some very intriguing directions indeed.

A terrific addition to the MCU with fabulously naff opening title music too.