I saw Liam Neeson’s latest collaboration with Jaume Collett-Serra (their fourth after Non-Stop, Run All Night and Unknown) last night and the results were pretty much as expected. Those wishing to avoid finding out what happens and what the plot entails are in safe hands here as, of course, I’m saying nothing, however they should avoid the spoilerific trailer (which I was sadly subjected to at the cinema last week) like the plague.

But, if you reeeeeally want to see it, here it is:

Neeson is pretty much at the top of his game in this sort of thing, playing the grizzled, world-weary every-man thrust into situations way above his head but managing to remain remarkably capable throughout at all times – Darkman, Rob Roy, Run All Night, a Walk Amongst The Tombstones, the Taken trilogy, The Grey, Unknown – you name it, he’s endured it.

The Commuter is absolutely no different.

After a brief-time lapse / editing masterclass montage to establish just how long Neeson has been enduring the rat-race on the same train every single day, and a small segue to a bar to sink a few and flesh out his back-story, the plot is then set up in an exposition-heavy way with speak-and-spell dialogue read out like stage directions to make sure the audience is paying attention (“…ten years I’ve been here…I have two mortgages…Danny’s college fees…”, you get the idea!).

The always-excellent Vera Farmiga briefly pops up at the beginning as the lynch-pin to the whole thing but her role in the film was so brief I felt that she was wasted with having to turn up for so little screen time. She is in the film via phone a lot, which doesn’t quite cut the mustard for me: much like Kiefer Sutherland’s performance in ‘Phone Booth’ it was just wasted here.

The situation quickly escalates and it’s not long before the corpses are piling up and the grizzled Neeson (‘Michael McCauley) is quickly getting his office attire very dirty indeed in blood, sweat, engine oil and broken glass.

Of course Neeson can pull off this sort of role in his sleep and is the usual force-of-nature as he used his very particular set of skills forged over a long (former) career to try and resolve the absolutely dire situation. Stalking the aisle like a man possessed, pistol and mobile phone in hand, snooping on people’s ticket stubs and asking all sorts of suspicious questions about passengers’ personal lives that would get you thrown off the 10:50 to Manchester Piccadilly in a heart beat (“haven’t seen you here before…travel on this train every day? Do you have a Boyfriend?…What’s in the bag?”), Neeson is as dependably entertaining as always. 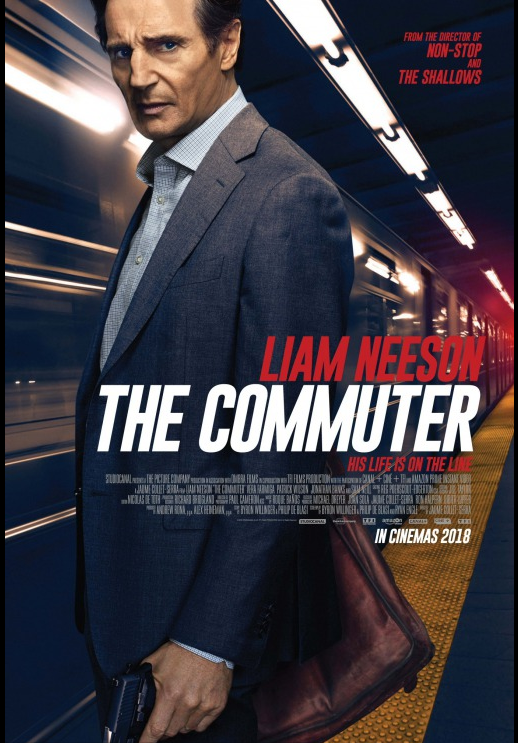 When the plot kicks in proper there are some bravura fight sequences which really did make me flinch and wince a few times with how bruising and crunching some of them are, including one which appears to have been filmed in one shot, but could just be clever editing.

The camera glides along the train and floats in and out of windows and doors with technical impressiveness, much like it did in Non-Stop, and the sheer momentum of the train keeps the pace and the plot continuously rolling, meaning viewers are never left bored and the film never sags.

It’s no coincidence that Derren Brown’s Stage Director Andy Nyman features heavily as one of the fellow commuters, given all the sleight-of-hand and misdirection that is going on under the audiences’ noses too.

Without saying anything about the resolution of the film – again, avoid the spoilerific trailer – the unbelievably ridiculous finale to this already forgivably ridiculous thriller is a sight to behold and had the audience laughing loudly at the unintentional preposterousness of it all.

However, it also means that with twenty minutes left to go, the film does seem to struggle to know how to end itself, so perhaps a slightly alternative and more exciting ending could have been chosen, in my humble opinion.

Overall, this is the kind of paranoid thriller Alfred Hitchcock would have had wet dreams over, if only he was born seventy years later. This unashamedly ludicrous 105 minutes of thrilling entertainment is conducted very well by both Collett-Serra and his ever-dependable star, making this very dependable action film well worth hopping on board for.